The capitalization rate, or “cap rate,” is foundational to understanding and evaluating real estate investments. It can be expressed simply as a ratio of the net operating income (NOI) to the fair market value or sale price of the property, typically calculated on an annual basis. Cap rates are widely reported at the market and CRE asset class level; investors evaluate the cap rate of a potential investment alongside cap rates of comparable assets in the same market.

The inverse of this ratio shows how many years it would take for a property to “pay for itself.” For example, a property purchased for $1 million that generates an annual NOI of $50,000 would have a cap rate of 5%, and would pay off in 20 years. In practice, of course, neither NOI nor market value of a property will remain constant. Thus, the capitalization rate of any particular property will fluctuate over time.

The cap rate can provide a simple way to compare the performance of properties of a similar size in a similar location. However, prevailing cap rates vary substantially across markets for similar properties. A Class A office building in New York or Los Angeles will typically carry a much lower cap rate than a class A office building in Detroit or St. Louis. This is due to market demand and inherent risk.

While cap rates provide a good snapshot of current performance, they should not be used in isolation. Even similar properties in the same location likely carry different prospects for future cash flow. While investors may use a certain cap rate to estimate a property’s value, this does not imply that the cap rate causes its value.

Current (or “going-in”) cap rate also does not say anything about the return potential of an improved property. When considering a value-add investment, investors will seek to understand the likely cap rate of the property once improved and stabilized, using market comparables.

Cap rates are an incomplete metric due to the inexact nature of predicting future cash flows. As such, it is prudent to look at other return metrics that can help provide a more complete picture. One good alternative measure is yield on cost (YOC), which works very similarly to cap rates.

The formula for yield on cost is market rent divided by the total amount of money put into the deal. Therefore, YOC is a great alternative to cap rates because there is no dependency on predicting future cash flows/occupancy in the property. Yield on cost can also be more useful when evaluating value-add investments, because it considers rental cash flow as a percentage of total project cost, rather than just the purchase price.

Real estate investment theses are predicated on an exit event, typically a sale. Projecting how NOI and prevailing market cap rates will move between acquisition and sale of a property is key to projecting sale proceeds, and hence overall expected return. The expected sale price of an asset at the end of a hold period is often very sensitive to minute shifts in the going-out cap rate. Hence, real estate investors take great care in forecasting this figure. It’s typically realistic to forecast a going-out cap rate equal to or higher than the going-in cap rate, all else being equal. This is because as buildings age, they usually become more risky and less able to sustain growing rents. This effect will be more pronounced the longer the hold; in other words, the more time elapses between the initial sale and the exit, where the going-out cap rate is forecasted.

Other factors in forecasting going-out cap rates include: 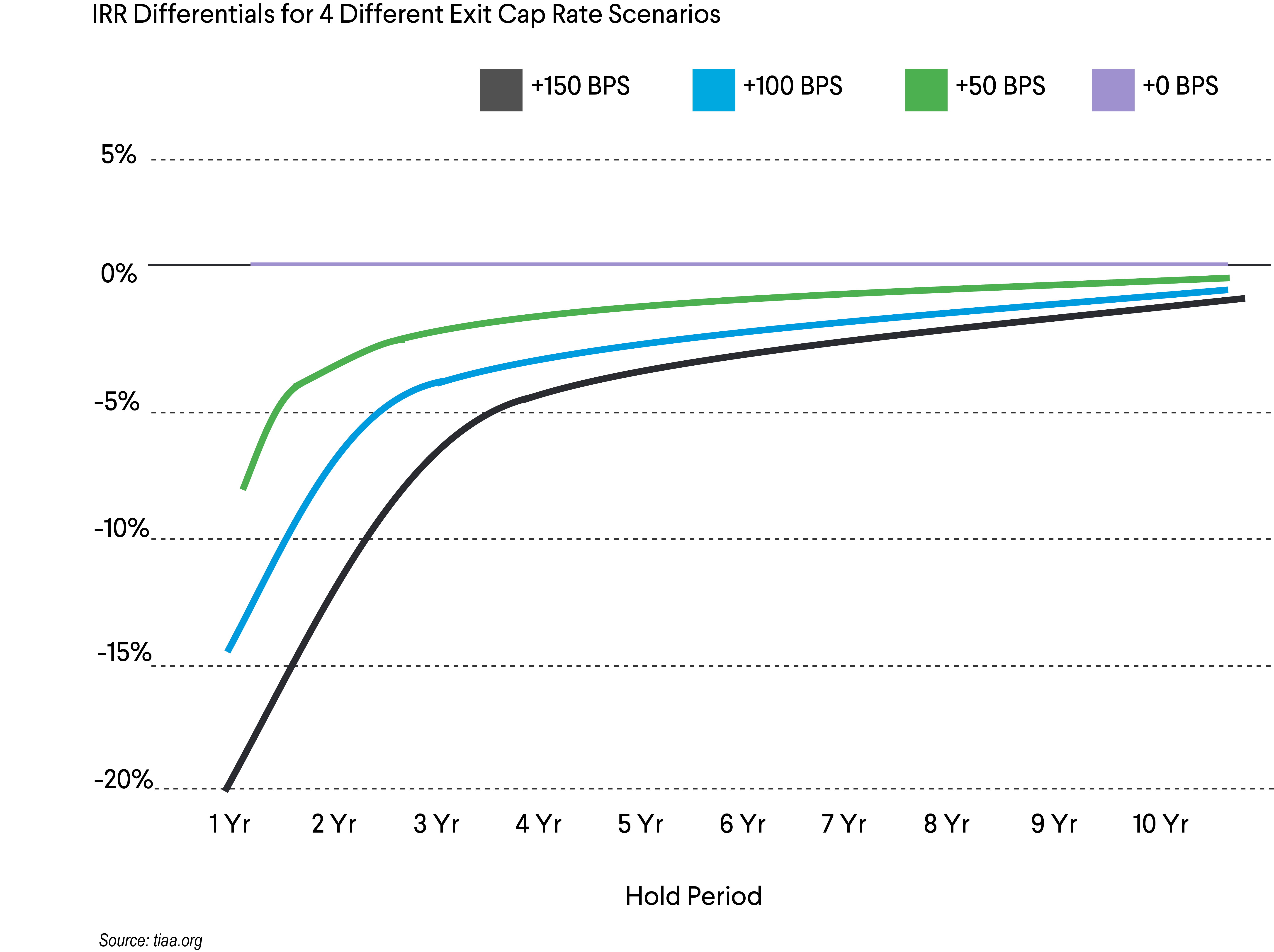 The compounding effect of NOI means that exit cap rates have less impact on ROI the longer the investment’s hold period.

Industry watchers have theorized about a positive relationship between interest rates and cap rates. The theory holds that rising interest rates increase the cost of borrowing – and hence cost of capital. In turn, this cools off real estate markets, as fewer real estate investors will compete when assets go to market. Some investors also worry more generally about the dampening macroeconomic effect of rising rates. Specifically, rising rates boost incentive to save. This correspondingly lowers marginal propensity to spend and tempers consumer activity – while disincentivizing job-creating investments. The presumed outcome would lower demand for commercial real estate assets, all else being equal, adversely impacting property values.

“Cap rates are more driven by one’s view of growth in the economy and growth in rents than interest rates alone.”

This sounds reasonable. However, it ignores the true cause-and-effect of monetary policy: interest rates increase in response to robust economic growth. In other words, the economic fundamentals in play at the macro and market levels generally carry stronger implications for cap rates than do marginal increases in the cost of capital.

Cap rate is a critical expression of both return potential and risk inherent in a real estate asset. A lower cap rate will indicate that the market regards it as a safer asset. Accordingly, a lower cap rate asset will by definition offer less in rental income relative to its fair-market value. Lower cap rates are characteristic of primary markets with strong demand drivers, where competition among real estate investors is fierce.