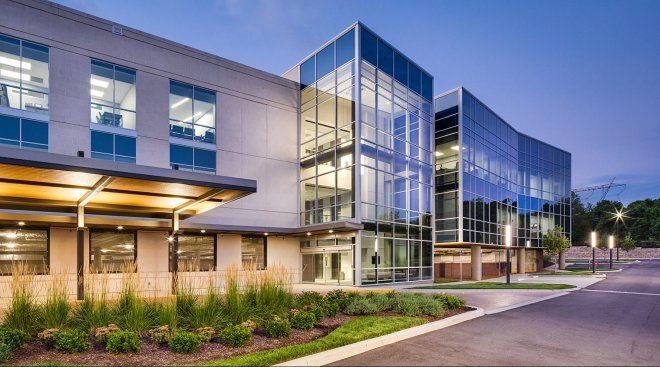 The Medical Office Building (MOB) asset class has exhibited consistent growth in recent years, buoyed by increased demand for outpatient services and strong historical performance. MOBs are a subset of the greater office asset class and are growing in stature among experienced real estate investors. As the name suggests, MOBs are developed specifically for tenants in the medical field to consult with patients and perform various surgical procedures. In this article we take a look at the major advantages to investing in MOBs, and why it is a particularly favorable time for the asset class.

Compared to other asset classes, and the overarching office class specifically, MOBs generally exhibit uniquely steady long-term occupancy rates. CBRE data suggests that medical office vacancy rates have consistently been lower than the total office sector, with vacancy rates falling from 11.1% in 2010 to 8.4% by mid-year 2018. According to the CBRE 2019 Healthcare Real Estate Investor & Developer Survey Results, 99% of CRE firms stated that between 2018 and 2019 the occupancy of their medical office portfolios either remained stable or increased from the year prior.

The strength of MOB occupancy rates is partly due to the length of leases that medical tenants typically sign. Because the physical features of MOBs are very specific—operating rooms and waiting rooms—the build-out is often more costly than that of a traditional office tenant, and medical tenants typically sign longer leases for this reason. Tenants also tend to stay put longer given the high switching costs associated with relocating. In addition to stable occupancy rates, MOBs have also exhibited consistent rent growth over the past ten years, which can be seen in the below graph. In 2018, the average asking rental price increased to almost $23/SF, a 1.4% increase year-to-year. Average asking rent for U.S. MOBs remained at a near-record level in Q2 2019 according to CBRE. 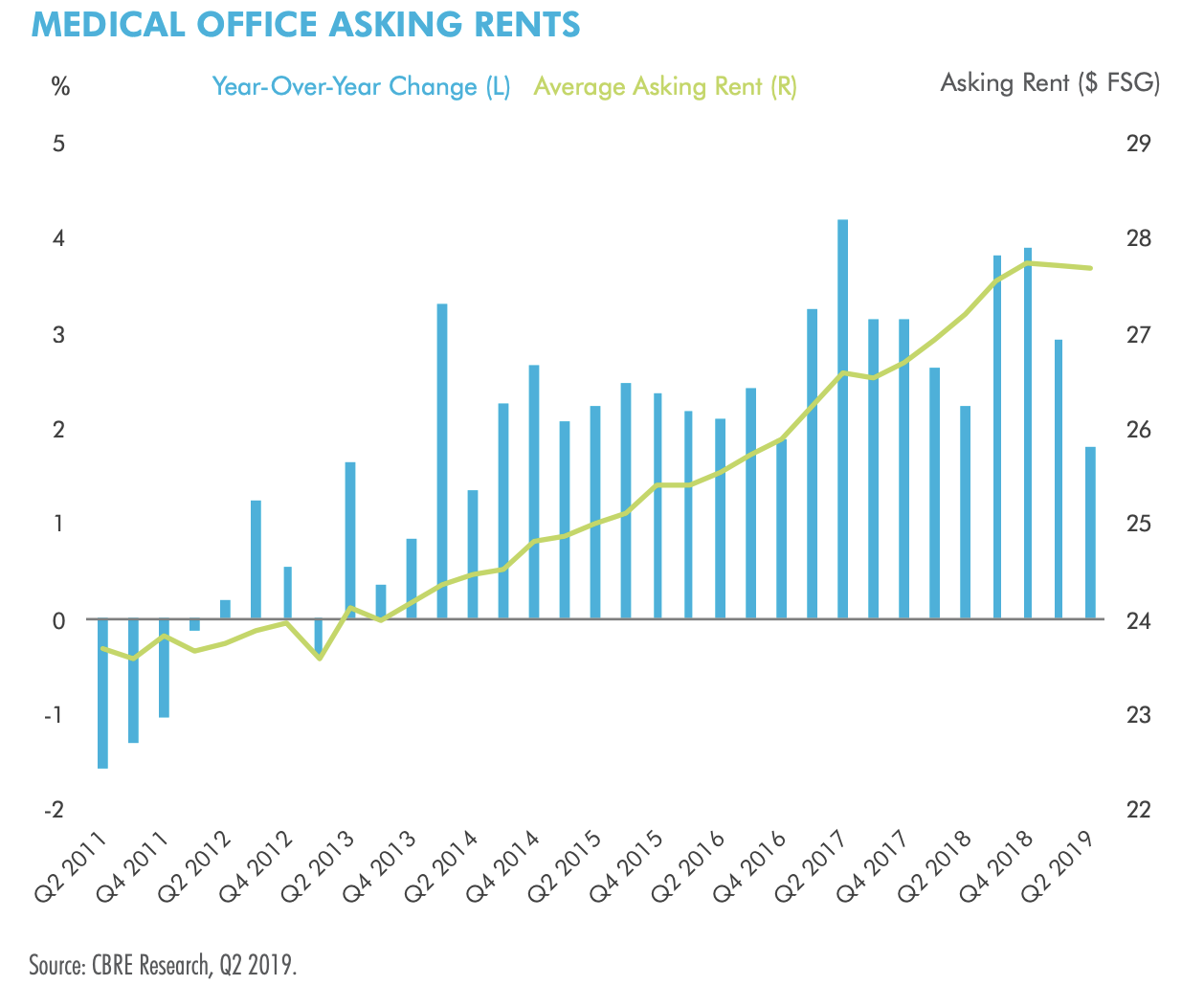 Not only are occupancy rates stable among MOBs, but rent collections have been strong even amidst the current pandemic. Physicians Realty Trust, a healthcare REIT with a strong focus on MOBs, reported collection of 94% of rent in April, 93% in May, and 96% in June.

Due to the strong historical performance that MOBs have demonstrated over the past several years, many investors, institutional or otherwise, have taken notice of the asset class’s potential. MOB sales prices have steadily increased over the last decade. Dollar-value-per-square-foot has increased by 49.8 percent in the last five years. MOBs even showed a relative resistance to the market downturns during the Great Recession, which may be a good indicator of how they will perform given the anticipated recession caused by the current pandemic. Much of this performance can be attributed to increasing investor interest in MOBs. Even healthcare REITs are shifting their focus to medical office buildings because of their strong performance and stability. The big three companies—Healthpeak Properties, formerly HCP ($14.03B AUM), Welltower ($32.92B AUM), and Ventas ($26.61B AUM)—have all become attuned to the attractiveness of the MOB asset class and emphasize strategies involving medical office buildings. 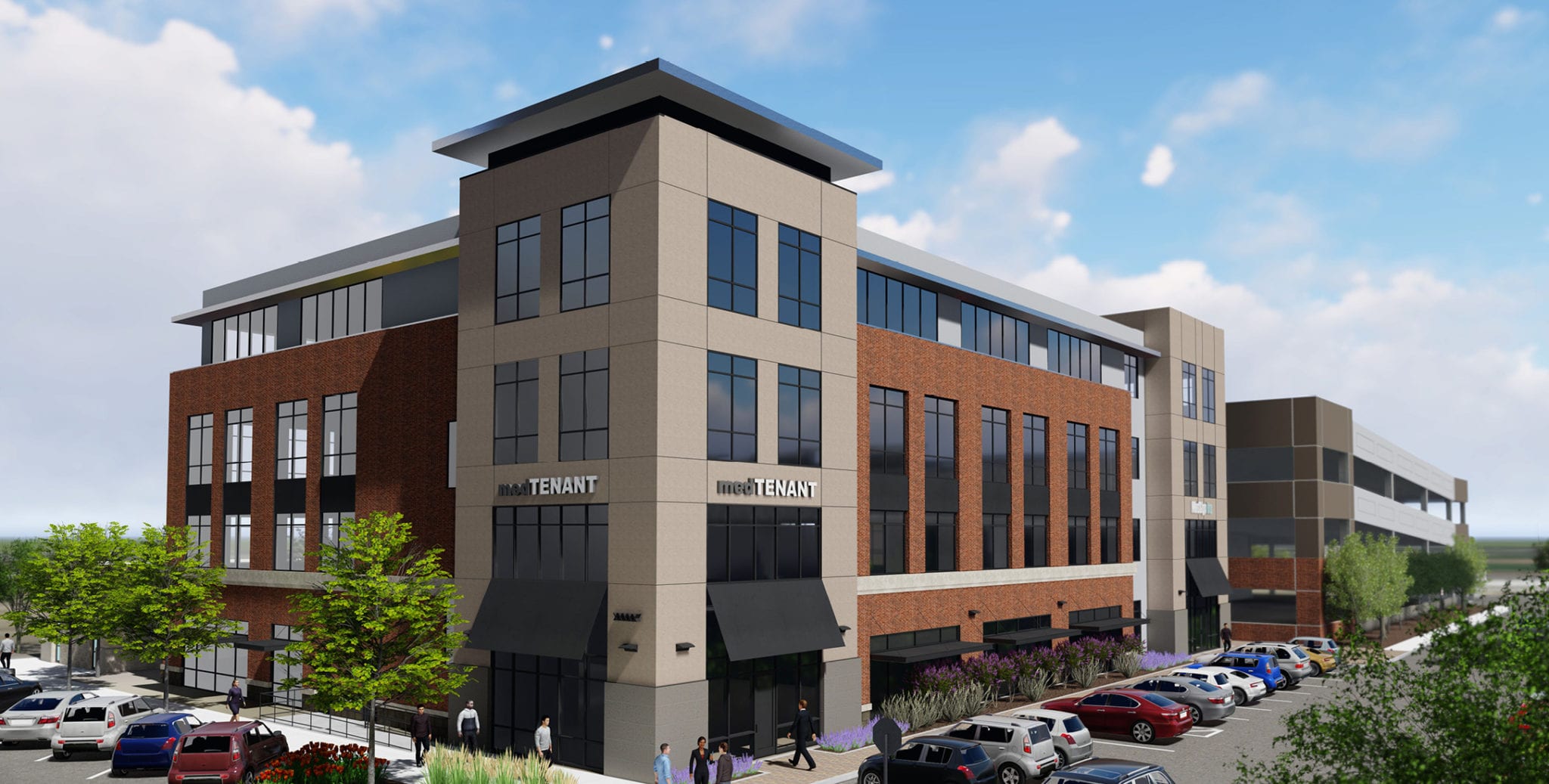 Advancements in technology and clinical innovation, along with a change in patient preferences, have led to a growth in demand for outpatient healthcare services. The number of outpatient centers across the U.S. increased 51% from 2005 to 2016, and the trend does not show any signs of slowing. This can be attributed to patients’ desire for more convenient and more affordable access to healthcare, as there is a surge in employer-sponsored, high-deductible health plans requiring patients to pay larger out-of-pocket amounts, and also to medical provider’s abilities to perform procedures outside of the traditional hospital setting. To keep up with patient and provider demand, MOBs are being developed at a fast pace across the country; more medical office transactions are being made in cities with high population growth, according to CBRE. In 2019, Chicago, Cleveland, the Inland Empire region, and Atlanta led demand for MOBs in their respective regions.

People are always going to need access to healthcare, and while telehealth has emerged as an alternative to traditional medical services during the COVID-19 pandemic, virtual medicine is not a sustainable practice for all healthcare specialities. Trevor Royce, Assistant Professor of Oncology at UNC-Chapel Hill, explains that while telehealth is a great solution for now, there are some questions about its efficacy long-term; “how will the safety and quality of care be impacted? How will we integrate components of the traditional doctor visit, including physical exam, lab work, scans and imaging?…These are all potential downsides if we are not thoughtful with our adaptation.” COVID-related closures have affected the healthcare industry; many MOBs, especially those that offer elective procedures, have been forced to shut their doors. However, despite the current environment, many healthcare tenants are recognizing that “they will need their space for the short and long term,” says Chris Isola, EVP at JLL, who has closed on six long-term leases for healthcare clients during the pandemic. According to Green Street Advisors LLC, MOBs should provide the lowest risk if a recession hits due to COVID-19. There is pent-up demand for regular doctor’s visits and elective procedures, and once the pandemic ends MOBs will be faced with a large influx of patients who could not receive medical services during the time of closure.

If you are interested in learning about investment opportunities on our platform or would like to find out more information on the medical office building asset class (or other unique commercial real estate investment opportunities on the EquityMultiple platform) please don’t hesitate to contact us via ir@equitymultiple.com or schedule a time to speak with our team by clicking here.